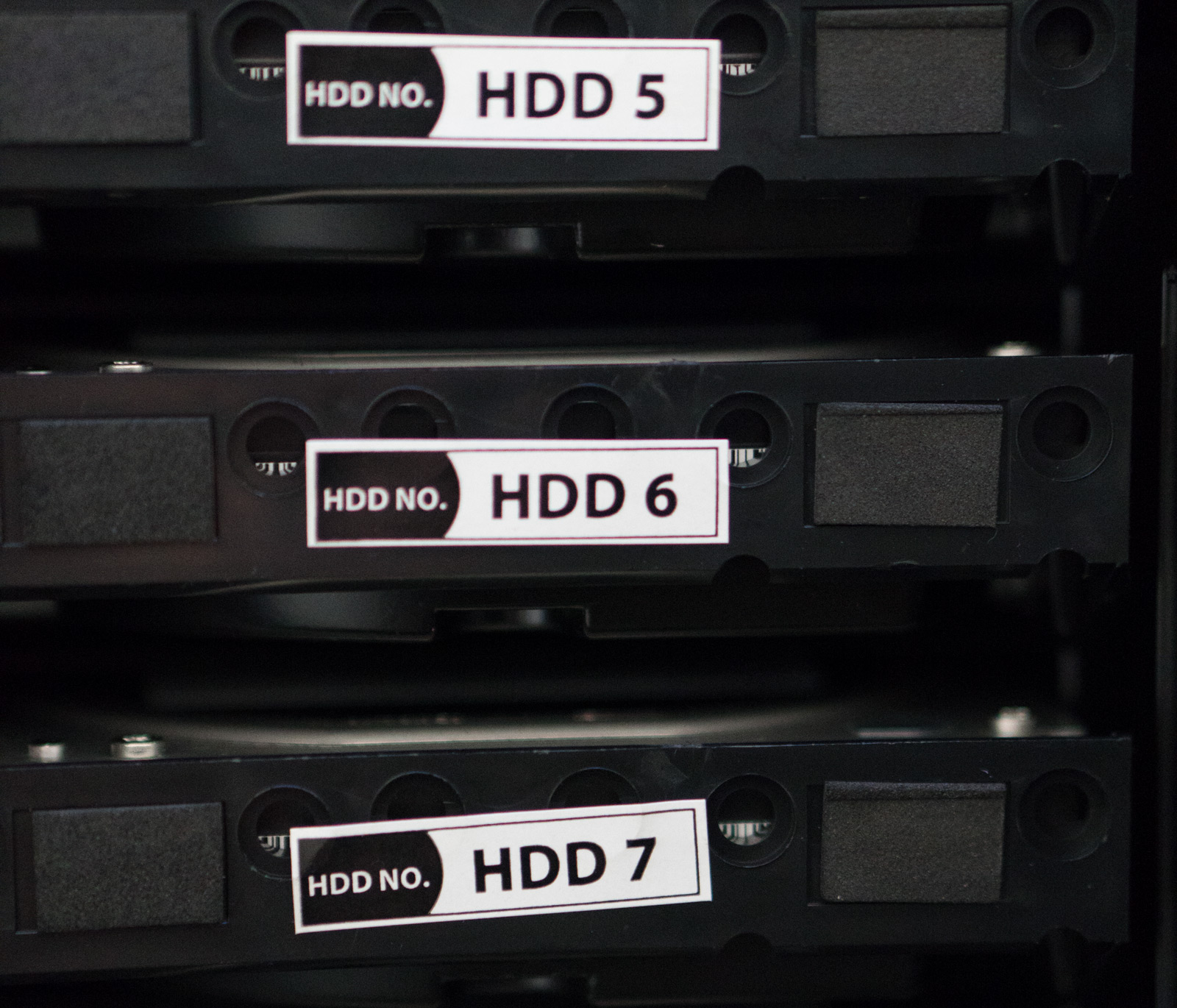 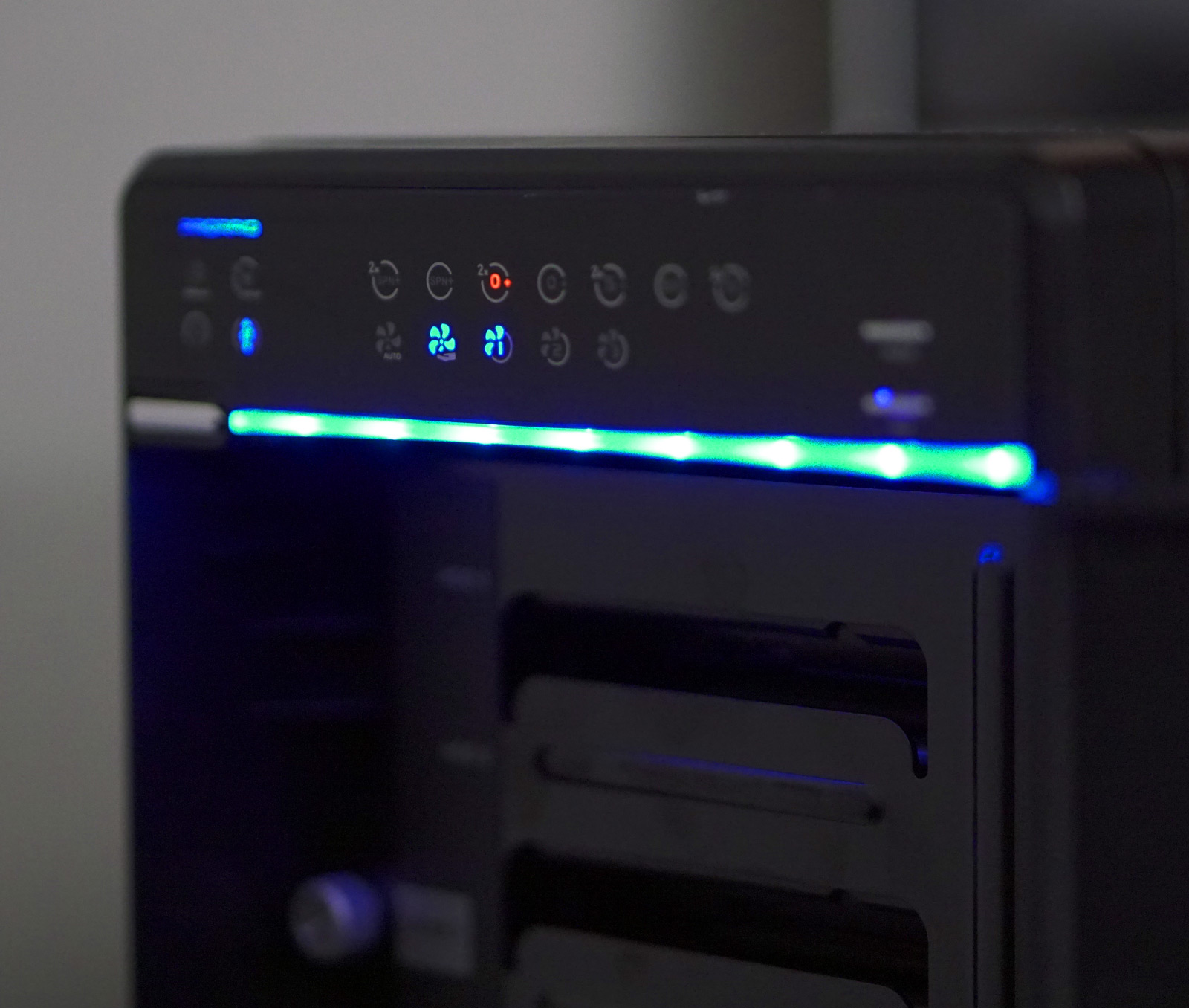 This $359 enclosure is a great solution for long term, non-critical archiving paired with the refurbished Hitachi 3TB Ultrastar 7K4000s.

I recently decided to add a large capacity, long-term and always connected archive solution to my workstation. This is so I can move projects off of my internal SATA III 8TB RAID array, and free up space there for new incoming projects and files. Previously I had been archiving to individual bare 3TB Western Digital Green drives, and accessing them by a “toaster”  style disk bay. I grew tired of having to look across multiple drives, so decided to pull the trigger on a bare 8 bay RAID enclose, and then stack it full of hard drives.

For comparison sake, let’s take a look at the top 7 results from B & H Photo for “24TB RAID” – you can see the prices range from $1599 to $2715. Granted these are Thunderbolt enclosures and are arguably better units with better features and quality. But you can see the entry point to a 24TB RAID enclosure seems to certainly be in the $1500+ budget range, which is why I decided to see if I could build a comparable storage enclosure myself for far less cash.

I’ve had a Mediasonic ProBox 4 bay enclose since May of 2015. This has housed my primary working drives for print and web development projects. It has 3x 1TB HDDs and a 3TB backup drive. It’s definitely a “consumer” grade product but it has worked perfectly for almost three years now without incident, so I like and trust the Mediasonic brand.

The new enclose is the big brother to the ProBox, and has 8x HDD slots configured to either work all together or in two separate drive layers. I chose to setup the drives in two separate RAID-0s, giving me two 10.9TB drives after formatting. You have to use a form of RAID with this box and controller, so if you don’t want to RAID and just want to access up to 8 separate drives, they have another product that can do that, but doesn’t have any RAID functionality.

The enclose also offers several other RAID options, like 2x RAID5, RAID50, 2x RAID10, or a single 8 disk RAID0. I went with the 2x RAID0 as I don’t require redundancy here as the media is already backed up in two other locations, but I do want the fastest speed possible when I am opening the old Premiere Pro projects for re-edits or copying media to other hard drives. All of the media contained on this enclosure is also backed up to individual 3TB drives, which are each stored in individual electrostatic bags and cardboard boxes, All of the data is also backed up from this enclose directly to Backblaze as well, so we’re following the 3-2-1 backup plan here (have at least 3 copies of your data. Store copies on 2 different drives locally. Keep 1 backup copy offsite). I am using the enclosure over a USB 3.0 connection on an ASUS X-99A motherboard and Haswell Core i7 5820k CPU.

For hard drives, I went with refurbished Hitachi 3TB Ultrastar 7K4000. I picked up these 7200RPM, 64MB cache SATA III drives for $65 a piece. I decided to just fill the enclosure now, so that way I can build my RAID arrays fully, and not have to worry about rebuilding them or adding drives at a later date. If you need to add drives or chooose a different RAID mode, you will need to move your data to a temporary drive, make the change to the enclose (which formats all drives) and then copy your data back to the PRORAID. This is something that I wanted to avoid, so I knew it was important to get the complete system running with all the drives at the start. The refurbished Hitachi drives are a perfect candidate for this enclose, as they offer fast speeds, and have had a complete sector by sector disk check to make sure there are no issues… so they’re cheap, fast and there is a plentiful supply of them in the event that you need to replace individual drives.

Speeds varied between 60-70MB to over 1.5GB depending on whether I am read/writing and what type media I am copying from. 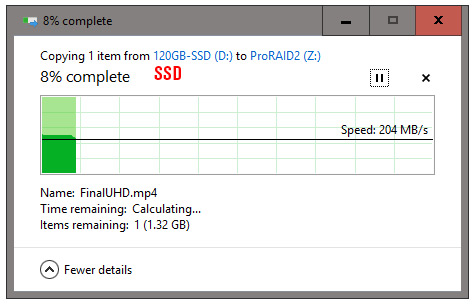 It has now been over a year of use on the RAID array. I have used it quite a bit to load old footage into current edits, and there’s been no problems. All drives and the enclosure are working as expected.

It has now been over 10 months of active use and the enclosure is still working fine. All HDDs are operational and I still hit the same speeds. RAID array 1 is 75% full and I will now be starting to use the second RAID array for archiving.

It has now been over four months of using the MediaSonic PRORAID enclosure with the HGST refurbished drives, and there has been zero problems with the functionality of the enclosure or the drives. It always comes right online, transfer speeds remain fast, and there’s been no issue with either of the RAID-0 arrays. I currently have one of the 10.9TB arrays at about 70% capacity, and the other RAID-0 remains mainly free.

The only negative I can report is that the locking mechanism on the enclosure is very poorly designed, and I can not recommend using it. If you need to secure your enclosure, I would put it in a more robust locking case, or secure room. Otherwise, the 24TB enclosure has been working exactly as intended.